skip to main | skip to sidebar

I have three balls of Kid Silk Haze that my friend bought and comissioned me to make a shawl/scarf for her with.

That was 2 months ago.

I filled the gap by making her a Firework/Christmas scarf using Noro and funky fur (it's brilliant, if I do say so myself, and looks like the woolly embodiment of fireworks), however she is beginning to ask again where the "pretty thing made of the soft wool" is. I haven't begun it, and time is ticking away.

Well, to sayd i haven't done it is a fib - i have made many versions of different scarves. I made a third of the Party Scarf from Magknits, half a ball's worth of Kiri, I had a mad stab at creating something myself, but nothing looked right. Bearing in mind that the three balls have now each been frogged from three projects, and I don't need to tell you how much fun that was, the yarn itself was beginning to argue.

And then I saw this on the Winter Knitty http://www.knitty.com/ISSUEwinter07/PATTicequeen.html

It's perfect and lovely and completely terrifying.
"Russian Join"?, two different casts on and off? 300 Beads!?

I read and understood the pattern, i just need to take the leap and make it. And buy 300 beads - obviously.

It's a shame about the Golden Globes, and about awards season in general in the US. I am a huge fan of American TV series and think that 80% of the time, they blow UK TV out the water in production, acting but most of all writing (see 30 Rock, Friday Night Lights, Dirty Rotten Money), so I'm behind the writers strike 100%. But i will miss seeing the redcarpet monstrosities and looking at the Lovely George in a tux. It's one of the higlights of the year!

More people should watch Hollyoaks, and that's all I have to say on that!
Posted by Mouldydc at 11:18 PM No comments:

Good LORD it's been a long time!

Over a year since my last post, and I still can't use this flaming thing!

And i'm pretty much knitting the same sorts of things too! Socks bags and scarves are easier, and better to give as gifts - both on time and the pocket. :)

The dreaded "Curse of the OH Knit" struck last September, with my OH and I breaking up as I was on sleeve one. I really thought that after 5 years I'd be immune from the curse. Just goes to show I suppose, you can never be too careful.

I just got a brand new laptop for Christmas, so I will be updating the blog all the time and once I get all the kit for it, i'll be able to add digi pics and whatnot (she says, unconvincingly...)

In the meanwhile, if anyone has got a simple sweater pattern for a plus sized lady, maybe with a V neck, I'd love to hear it. Oh, and this is the darling nephew, fast coming up on his 3rd B'day (this is an old photo). He'll be hereon referred to (often I'm sure) as DN! xx 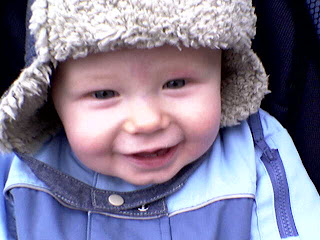 I’ve been spending a lot of time reading the Television Without Pity site, specifically Project Runway and Top Chef recaps. I really enjoy the snark, and also the person who recaps Top Chef clearly knows her spuds. I wish there were a version that recapped shows I watch – like … ummm… Daziel and Pascoe! Or … Call Me A Cabbie! Imagine the snarking possibilities. I personally would revel in the chance to cover X-Factor and/or How Do You Solve a Problem like Maria.

I’ve asked if they’re planning on opening a site, but so far had no reply. I imagine that running a behemoth site like TWoP leaves you with little time for thoughts of expansion. Perhaps I’ll just add tiny crunt-filled recaps at the end of my blog. Hmmm… Roll on Saturday.

My sister is really suffering. One of her very close friends died recently and she’s not coping very well with the grief. I don’t know what I can do to help. For one thing, I’m very far away and for another – I’m terrible around grief, I just can’t help at all and end up making really lame jokes and sounding like a … well a very rude word. And I just want to help her through it, she’s had a really tough couple of years.

I don’t know what to do. 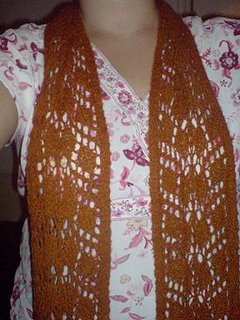 This is it all blocked and ready to sent to the MIL. At Christmas. I made it slightly longer than the pattern, 3 more repeats. It comes down to thighs, but MIL has big jubblies, so I'm not sure where it'll sit on her!
:)
Posted by Mouldydc at 1:54 PM 2 comments:

Sites that are Alrights